In an era that saw many gifted and diligent ministers, missionaries and evangelists being used by God to powerfully advance Christ’s Kingdom work in South Africa, Andrew Murray (1828-1917) emerged as that country’s premier preacher, devotional writer and Church leader.

Whilst being a man of seemingly constant action, Murray was also a contemplative individual. His mind constantly probed new avenues and depths of biblical, spiritual truth. His thinking and teaching were deeply devotional in nature. Through his prolific writin endeavours, which saw nearly 240 works (including over seventy books) published, Murray was able to have a worldwide ministry to hundreds of thousands of Christians during his lifetime.

Andrew Murray’s writings and influence are still felt today and Vance Christie skilfully and faithfully brings his story to life for a new generation. 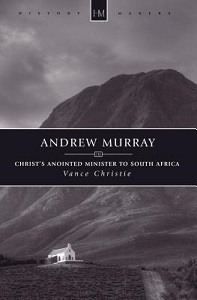