These stories are retold by acclaimed writer and dramatist Brian Sibley and read aloud by Cliff Richard himself for a whole new generation of young ones to enjoy.

2008 sees Sir Cliff Richard achieve his 50th anniversary in the music industry. Within months of Cliff turning professional in August 1958, he became and remained one of Britain’s greatest starts, and in the decades since he has delighted audiences with his music, films and stage performances.

When in 1966 he publicly declared his commitment to Christ, there were many who predicted either a ‘passing fad’ or a swift end to a career. The cynics were wrong on both counts. Cliff is still packing huge concert venues in the UK and around the world, and his Christian faith remains his life’s driving force.

In 1995 Cliff became the pop industry’s first knight of the realm – bestowed for his consistent and largely unsung services to charity.

The great stories of the Bible have been treasured for generations. They are astonishing and inspiring tales of people at their best and at their worst. Most of all, they tell of the love of God.

Brian Sibley is a writer and broadcaster whose books include Shadowlands: The True Story of C.S. Lewis and Joy Davidman, The Land of Narnia and several titles devoted to J.R.R.Tolkien and Middle-earth.

Stephen Waterhouse has been busy illustrating since he graduated in 1998 from Loughborough University. He is the creator of the Get Busy children’s book series and the illustrator of the popular Runaway Chapati and Engines, Engines. 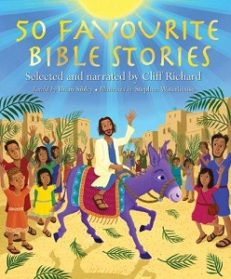