This moving book describes the years of intracranial surgery that Emily underwent with the gradual loss of the facilities that defined her life – her hearing and her balance – and a gradual re-evaluation of her life plans.

Emily Owen was a multi talented teenager with the world at her feet. Highly intelligent, athletic and a gifted musician, she was destined to excel in whichever field she chose to pursue. At the age of 16, Emily was diagnosed with Neurofibromatosis Type 2 (NF2) and less than a month later, she was in hospital and fighting for her life. Over the coming years, NF2 would steal her education, her smile, her hearing, her ability to walk. With her life plans in ruins, Emily struggled to find meaning and identity. Good things in her life weren’t good any more. Because they were no longer there. With gentle humour and heart-breaking honesty, Emily shares her story. Slowly and painfully, she discovers value in new places, seeing the rainbows in the silence.

‘This moving book describes the years of intracranial surgery that she underwent with the gradual loss of the facilities that defined her life – her hearing and her balance – and a gradual re-evaluation of her life plans. That she coped with stoicism and a sense of humour owes as much to the devoted support of her family and her unshakeable religious faith as to her own indomitable personal strength. She has refused to give in to NF2. Despite all she has suffered she is still Emily.’ Professor Richard Ramsden MBE, Emeritus Professor of Otolaryngology at the University of Manchester

‘Emily Owen’s memoir is a testament to the courage and resilience of the human spirit. I met Emily over fifteen years ago as she was anticipating the drastic operation that would save her life, but would leave her totally without hearing. Emily, a gifted musician, wanted to hear a performance of The Secret Garden, scheduled to open at the Stratford Theatre in 2000, several days after her surgery. The theatre arranged for her to attend a dress rehearsal. As I sat with her, we exchanged thoughts about musical choices and creative expression. I was deeply moved by her passion and courage as she faced the future of not being able to hear music again with her ears but only with her memory. Not only did Emily survive the ordeal, but the experience widened her appreciation of life, deepened her spirituality and broadened her unique ability to communicate. I would say that Emily Owen is not only STILL EMILY, but a magnified and magnificent Emily.’ Lucy Simon Singer, songwriter and composer of the musicals The Secret Garden 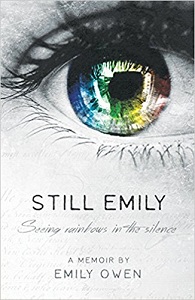