‘Mere Christianity’ is a revised and amplified edition, with a new Introduction, of C S Lewis’s three famous books, ‘Broadcast Talks’, ‘Christian Behaviour’ and ‘Beyond Personality’. Thus are gathered together for the first time Dr Lewis’s modern revaluations of Christian apologetics, ethics and theology – in fact all the central problems of belief and of conduct which face Christians today. The author is now firmly established as one of the most notable thinkers of this, or any generation, and the appearance of ‘Mere Christianity’ will be warmly welcomed. C S Lewis, Fellow of Magdalen College, Oxford, has been described as a modern descendant of John Bunyan and as possessing “the rare gift of being able to make righteousness readable”. Over a period of twenty years he has written a score of books stimulating thought on the practice of religion in everyday life and on its appearance to the problems of twentieth century man and woman. He has recently been appointed to a newly created Chair at Cambridge University as Professor of Mediaeval amd Renaissance English. 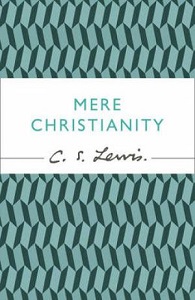