A classic Christian book about the four facets of love; affection, friendship, eros and charity.

The four loves the author distinguishes are Affection, Friendship, Eros and Charity; and while each has been examined sufficiently often, from Ovid to St. Bernard and from St. Paul to Stendhal, there have been few advocates to do justice to them all. Professor Lewis sees how each merges into another, how one can even become another, without losing sight of the necessary and real differentiation between them. He knows the peculiar values of each without supposing any to be all in all or self-sufficient; and he discerns too the deceptions and distortions which can render the first three, the natural loves, dangerous without the sweetening grace of Charity, the divine love

which must be the sum and goal of all. This anatomy of love is illuminated and enlivened by Professor Lewis’s gifts of immediacy, lucidity and aptness of expression and illustration. “He has never written better. Nearly every page scintillates with observations which are illuminating, provocative and original.” CHURCH TIMES 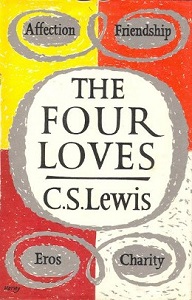