Christian And The Pharisee, The

A heartfelt correspondence of two prolific religious leaders, both acclaimed theologians, as they seek to both vigorously defend their own beliefs and allow themselves to be challenged by the claims of the other.

The book reproduces a candid exchange of letters between two leading religious figures ¨ an evangelical preacher and a senior Jewish rabbi.

This groundbreaking publication is a rare opportunity to read the heartfelt correspondence of two prolific and acclaimed theologians, as they both seek to vigorously defend their own beliefs and allow themselves to be challenged by the claims of the other. As the discussion continues we see mutual respect grow and a strong friendship forged before the relationship is inevitably tested as they encounter points of seemingly irreconcilable differences.

Though there are issues and beliefs which separate the two theological camps, this book shows how they share enough to not only get along, but form strong alliances.

‘A fascinating book of dialogue between a leading preacher and one of the most famous rabbis of our time.’

‘No punches are pulled, no fundamental question of faith is avoided – but with humour, kindness, respect and love, fundamental issues of religion are discussed and probed. A timely and amazing book.’

From the Foreword by Dr George Carey, former Archbishop of Canterbury

‘Judaism and Christianity have for centuries been divided by the same holy Scriptures. Anyone seeking to understand the chasm, and how to bridge it, should start by reading this erudite, civilised and charming debate.’

‘Every religious person will find these exchanges fascinating, even if they may not accept their ultimate conclusions.’

Dr R. T. Kendall was Minister of Westminster Chapel in London for twenty-five years and now lives in Florida from where he continues his career as a popular Christian preacher and writer.

Rabbi David Rosen, former Chief Rabbi of Ireland, has lived in Jerusalem for the last twenty years from where he conducts his efforts to promote interfaith relations around the world. 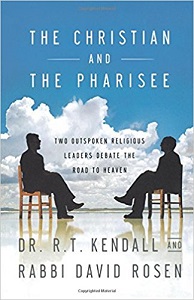 You're viewing: Christian And The Pharisee, The £8.99
Select options