Quirky church history on all things you never knew about beards and the religious significance behind them!

Beards have had cultural and religious significance for thousands of years. A fascinating story is to be told of the religious significance of beards from the ancient civilisations to today. This book will survey beard theology from ancient Egypt, Greece, Rome and Mesopotamia, to the Jews of Jesus’s day and through to the early Church fathers who strongly promoted the beard, the Latin church which outlawed it leading up to and after the Great Schism of 1054. We will pursue the story of the protestant reformers and leaders of the evangelical revival of the 19th century all had plenty to say about the beard.

a series of entertaining true historical stories, such as the cardinal who lost the papacy due to his beard, the female pharaoh who wore the fake beard and how beards were cited in the papal bull of excommunication that formalised the split of the Eastern and Western churches in the great schism.

As well as providing a unique historical narrative, it also provides a subtle basis for reflection on current theological disputes and debates, gently inviting you to consider what parallels there are to the historical theological disputes which today seem trivial but caused heated passions in their day. It will entertain and inform in equal measure. 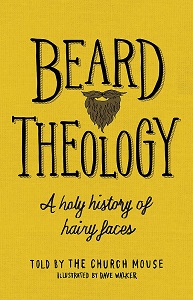