Under Their Very Eyes

Tom Hamblin spent a decade leading ministry expeditions into the heart of Borneo. Then the Lord re-directed Tom and his wife Edna to a different mission: to deliver tens of thousands of Bibles to Muslims in the Arabian Peninsula.

Tom Hamblin and his wife Edna were directed by the Lord to deliver tens of thousands of Bibles to Muslims in the Arabian Peninsula. Surmounting ‘impossible’ restrictions, they openly conveyed shipment after shipment. Tom distributed Bibles by carrying them through city streets in transparent bags. Muslims unfailingly approached him to request copies. He also ucovered an extensive network of secret believers and a huge hunger for truth, proving the Islamic world is indeed open to the Gospel. 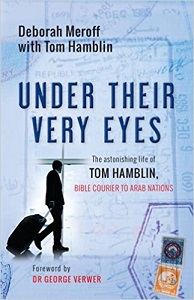 You're viewing: Under Their Very Eyes £8.99
Select options