In a world where religion seems to grow increasingly irrelevant The Shack wrestles with the timeless question, “Where is God in a world so filled with unspeakable pain?”

Mackenzie Allen Philips’ youngest daughter, Missy, has been abducted during a family vacation and evidence that she may have been brutally murdered is found in an abandoned shack deep in the Oregon wilderness. Four years later in the midst of his Great Sadness, Mack receives a suspicious note, ostensibly from God, inviting him back to that shack for a weekend.

Against his better judgment he arrives at the shack on a wintry afternoon and walks back into his darkest nightmare. What he finds there will change Mack’s world forever and quite possibly your own.

In a world where religion seems to grow increasingly irrelevant The Shack wrestles with the timeless question, “Where is God in a world so filled with unspeakable pain?” The answers Mack gets will astound you and perhaps transform you as much as it did him. You’ll want everyone you know to read this book!

WILLIAM P. YOUNG was born a Canadian and raised among a stone-age tribe by his missionary parents in the highlands of what was New Guinea. He suffered great loss as a child and young adult, and now enjoys the ‘wastefulness of grace’ with his family in the Pacific Northwest.

“The Shack is the most absorbing work of fiction I’ve read in many years. My wife and I laughed, cried and repented of our own lack of faith along the way. The Shack will leave you craving for the Presence of God.”

“This story reads like a prayer – like the best kind of prayer, filled with sweat and wonder and transparency and surprise. If you read one work of fiction this year, let this be it.”

“Reading The Shack during a very difficult transition in my life, this story has blown the door wide open to my soul.” 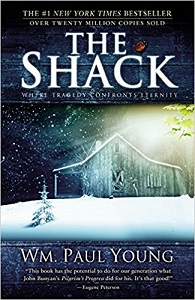 You're viewing: Shack, The £7.99
Select options