This book takes you through the week leading up to the crucifixion, looking at the amazing paradox of Christ the Servant – Christ the King.

MEEKNESS AND MAJESTY takes you through the week leading up to the crucifixion, looking at the amazing paradox of Christ the Servant – Christ the King. It looks also at the teachings that would have fed Jesus’ mind as He was growing up, the historical context out of which the Messianic longings grew and how God’s chosen Messiah was contrary to the Jewish longing for an all-conquering earthly king.

Through six study sessions you will follow the path Jesus took that last week – from seeing the crowds adulating Him as He entered Jerusalem, to Jesus washing His disciples’ feet, His betrayal, Peter’s denial of Him, to His walk along the streets carrying his own cross – and to His crucifixion.

Look again at your concept of Jesus and be encouraged to return to the Bible to deepen your faith and understanding of God’s purposes.

Elizabeth has spent much of her life in Cornwall. She was married to Wilfred for 21 years and after his death trained at Wesley Theological College, Bristol, being ordained in the Methodist Ministry in !994. Her first appointment as a minister was in the Camborne Circuit. She now has three churches in nortth-east London. As a Methodist local preacher, soloist with several choirs, and broadcaster on BBC radio and television south-west religious progammes, she is well known in Cornwall and Devon. She has also broadcast on Trans World Radio, Hong Kong Christian Radio and Radio 4’s ‘Prayer for the Day’. Elizabeth has also led church weekends, conferences and piligrimages to the Holy Land. 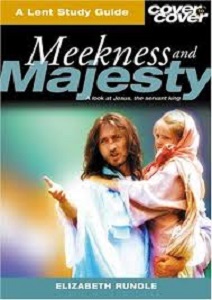