Lion and The Lamb, The

If you find Revelation hard to understand this book, by a respected biblical scholar, is an easy to read step by step introduction to the Bible’s last and most notoriously difficult to understand book. Suitable for all readers.

An easy to read introduction to the book of Revelation by a respected biblical scholar.; Do you find Revelation hard to understand? Help is at hand! Dr Pieter J. Lalleman, Tutor of Biblical Studies at Spurgeon’s College, London, takes the reader step by step through the challenges of the Bible’s last and most difficult to understand book.

Details: The book of Revelation is first and foremost a letter addressed to seven churches in Asia Minor (modern day Turkey). Like any normal letter the book contains references to the situation of the readers. As later readers we look over the shoulders of the original readers into a correspondence which initially was not directed to us.

Yet Revelation is also a prophetic book. John himself makes this claim in 1:3 and 22:7, 10, 18 and 19; in 10:11 his work is called prophesying. But what is prophecy in the Bible? People such as Elijah, Isaiah and Jeremiah were messengers of God who spoke his word to their contemporaries. God gave them spiritual insight into their time so that they could shine God’s light on it. They knew God’s precepts and applied these to the situation. Prophets warned people if they were not living as God wanted, but on the other hand they encouraged positive developments. Prophets pointed people to the consequences of their behaviour and in that context they also spoke about the future.

Jewish and Christian prophecy is thus not primarily a form of prediction of the future. It was first and foremost relevant for those who were being addressed; it confronted them with God’s opinion of their situation, with his hopes, his promises, and sometimes also with his judgement in case they would not listen. But when they repented, God adapted his plans, as we see in the book of Jonah. We will approach Revelation in the same way in which we handle all prophecy: by asking what kind of situation is in view and what was expected of the first hearers. Subsequently we will raise the question how this might be relevant to us in the twenty-first century.

Revelation is a letter and a prophecy, but it is also an apocalyptic book. The Greek word for ‘revelation’ in 1:1 is ‘apocalypse’. We often use this word in such expressions as ‘an apocalyptic event’, but we must be careful that our modern language does not hinder our understanding of the Bible. Apocalyptic texts are books which claim to contain revelations ab 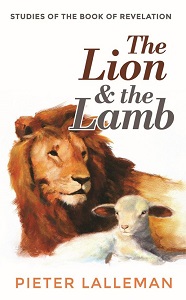 You're viewing: Lion and The Lamb, The £8.99
Select options