The inspirational story of one woman’s fight for some of the world’s most vulnerable AIDS orphans. “Heather’s role in fighting the AIDS pandemic in our country places her as an historic figure in the story of the new South Africa.” – Nelson Mandela.

“I have been aware of the heroic and compassionate work being done by Heather Reynolds and her dedicated team at God’s Golden Acre for a number of years. Heather’s role in fighting the AIDS pandemic in our country places her as an historic figure in the story of the new South Africa.” – Nelson Mandela.

“Heather has brought hope to a violence-ridden, poverty-stricken, and AIDS-devastated part of our land.” – King Zwelithini Goodwill KaBhekuzulu, King of the Zulu nation.

“Heather has been responsible for saving the lives of thousands of children. Her story is an inspiration.” – Gordon R. McNally, President, Rotary International in Great Britain and Ireland.

“The delivery of Heather’s vision for youth football in a demoralised society is evidence of the power of prayer in action. She sees it as a miracle – and indeed it is.” Dave Richards, chairman of the UK Premier League

“Heather is a doer and a great visionary. She is always out there extending the territory.” – Hugh Evans, Young Australian of the Year 2004 and Young Person of the World 2005

“Heather Reynolds is a soft-voiced, cuddly person who makes you feel warm all over, but you wouldn’t mess with her. Governments wouldn’t confront the problem, but she did. A modem day superhero, she’s doing God’s work.” – Don Maclean, presenter, BBC Radio 2 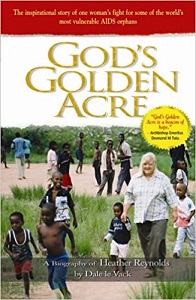