Cop For Christ, A

The story of a tough childhood among the gangs of New York through gritty years with the NYPD and a ministry taking the love of Jesus to people who know life only as a struggle for survival.

‘I looked around & saw the people of New York, my people, with their faces set in cold worried lines, their bodies bent against the problems life had thrown at them. I stepped forward & lifted the bullhorn to my mouth. This time my voice rang out, “Listen up, I’ve got some good news…”‘ Officer Mike DiSanza of the New York Police Department was a cop just like any other, patrolling the subways & streets of Harlem, when a near-death experience led to an amazing turnaround in his perception of the world around him. He discovered a new message of hope & compassion for all of God’s people & a new call on his own career. A COP FOR CHRIST tells Mike’s dramatic story, from his growing up in the Bronx, New York, through more than 22 gritty years with the NYPD & his astonishing ministry taking the love of Jesus to people who know life only as a struggle for survival. Mike DiSanza is President of International Cops for Christ, which has been serving the needs of police men & women around the world for more than 25 years. He has written this book with freelance Christian writer Liz Hinds. 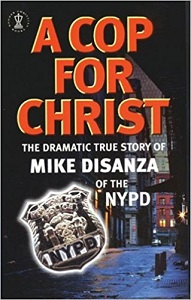 You're viewing: Cop For Christ, A £5.99
Select options