The story of Isobel Kuhn’s search for God and the lessons of obedience she learned as she found Him.

An autobiography with a difference – remarkable for its honesty and frankness; the story of one’s person’s search for God, and her obedience as she found Him. After the period covered by the book Isobel Kuhn joined the China Inland Mission, then she and her husband were with the Lisu tribe in south-west China for 20 years. They left China in 1950 and went to Thailand in 1952 to work among the Lisu there. Cancer took her home for surgery in 1954; her death took place in 1957. When this book was first made available (1957) one reviewer said that it was the freshest, most human and most spiritual piece of autobiography that had been published for many a long day. Subsequent demand has confirmed that it has become a Christian classic of widespread usefulness. This printing (1970) brings the number published in this country to 183,000 and the Moody Press has had equally remarkable sales both in America and through their agencies abroad. The book has been translated into 10 other languages, and finds acceptance among readers of widely differing backgrounds. 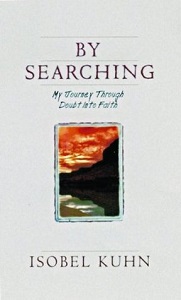 You're viewing: By Searching £4.00
Select options