I Wish I Was

The compelling and often haunting account of one woman’s journey to find her true identity.

‘One day, when I was forty-three years of age, I found a skeleton in my cupboard. The amazing thing was, it

looked just like me . She had a different identity, a different family, people knew about her but I’d had no idea that she even existed . . . I took a deep breath, stepped into the cupboard and we merged into one.’

Born just after World War II had ended, Anona was physically, emotionally and sexually abused by the man

she thought was her father. She was so unhappy that, when her friend suggested she was adopted she replied, ‘I wish I was’. Many years later Anona finds out that she is indeed adopted and begins a search for her true parents, discovering the shocking truth hidden from her for so many years which will test her faith to the limits.

The compelling and often haunting account of one woman’s journey to find her true identity.

‘I was fascinated when Anona first told me her remarkable story. I’m glad she now has the opportunity to share it with a wider public.’

‘In the world that we live in this kind of story needs to be read by everyone so that it can bring hope and encouragement, guiding you to where love can be found. It takes a brave soul to confront life’s trials but an even braver person to share in this way.’

Anona Coates, wife of Christian leader Gerald, lives in Surrey. As well as bringing up three sons, she has had a varied career, including interior design, sales and marketing, and doctor’s receptionist. She currently works alongside her husband in Christian ministry. To relax, she enjoys reading, particularly biographies. 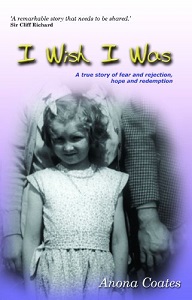