An inspirational, humorous and occasionally miraculous story, of a sports-mad Brummie who learned to live with unexpected disability – and conquer his many fears.

JOHN FLANNER was a typical Midlands’ teenager, when just before his twentieth birthday, he was quickly robbed of nearly all his sight, by a hereditary condition. Already struggling with a host of phobias, a twilight existence beckoned on every level.

He instead went on to lead a remarkable life, in which he triumphantly conquered his private fears, culminating in his Outstanding Achievement Award, at the very first national Civil Service Diversity Awards, in 2006. Along the way, the many twists and turns of his story, led to him offering precious help to many others in a variety of circumstances; from dis affected teenagers to bomb victims to a top-flight English football manager.

FEAR, FUN & FAITH is an inspirational, humorous and occasionally miraculous story, of a sports-mad Brummie who learned to live with unexpected disability – and conquer his many fears.

John Flanner is a popular motivational speaker in government circles and amongst a wide variety of general and specific interest groups.

“John’s story deserves to be told and anyone who reads this book, whether or not as an Aston Villa supporter, could not help but be inspired by his commitment, courage and faith.”

“I’ve known John for 25 years…I’ve witnessed many of the events that John tells of, in the book and I’m thrilled that his story is now in print. You will be moved to tears, laughter and amazement as you read this book…”

“We gave that award in recognition of many things, but not least for… [John’s] unstinting enthusiasm and dedication.” 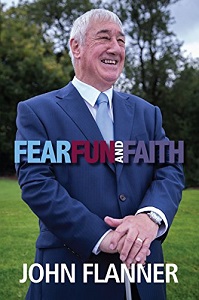