Faith of Barack Obama, The

Discover the apologetically Christian and liberal Barack Obama – and how he represents the changing face of religion in American politics.

Discover the apologetically Christian and liberal Barack Obama – and how he represents the changing face of religion in American politics. In the Faith of Barack Obama Stephen Mansfield presents an insightful portrait of the presidential candidate. Learn how his faith motivates him as a senator and leader in our nation.

You’d have to live in a cave to have avoided hearing about Barack Obama’s woes relating to his close relationship with the senior pastor at Trinity United Church of Christ, Dr. Jeremiah A. Wright. People question Senator Obama’s ability to represent persons of all races when he attended for so long a church defined by anger toward White America.

Fortunately, there is more to the senator’s faith than this one issue. As early as 2004, he delivered a powerful speech to the Democratic National Convention, taking a stand for his faith: “We worship an awesome God in the Blue States.” In The Faith of Barack Obama, Stephen Mansfield explores Obama’s religious faith without political or ideological bias. His basic premise is this: If a man’s faith is sincere, then it is the most important thing about him. It is impossible for us to understand how Barack Obama will lead without first understanding the religious vision that informs his life.

“You must read this perceptive and well written book. Then you will know why Barack Obama has such a passion for justice and equity, such a gift for filling people of different generations with a newfound hope that things can and will change for the better. His inspiration comes from his faith; he is an ardent believer. Yes, he is a Christian and proud of it.” 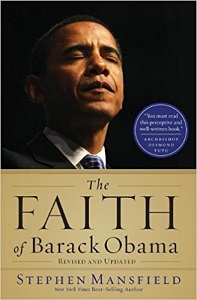 You're viewing: Faith of Barack Obama, The £12.99
Select options