Eric Liddle – The world record holder and Olympic champion who made headlines by refusing to race on a Sunday.

‘On a stiflingly hot Parisian afternoon in July 1924, six athletes lined up for the start of the Olympic 400 metres. In the sixth & outside lane was the Scottish sprint sensation Eric Liddell…’ So begins the new biography of the world record holder & Olympic champion who made headlines by refusing to race on a Sunday. His switch from 100 metres to 400 metres, & subsequent triumph, is now legendary. Liddell brought the same singleness of purpose to his faith as to his running. Julian Wilson’s vivid biography recounts his career as a missionary in war-torn China, his unassuming & selfless character,& his delight in practical jokes.The book draws upon interviews with Liddell’s surviving family & friends, & includes some fascinating anecdotes, reminiscences & extracts from his letters. Liddell died of a brain tumour in 1945, in a Japanese internment camp. The book also contains a number of rare photographs. ‘In many ways Liddell was the kind of person who, in my heart of hearts, I’d always dreamed of being…As this admirable biography demonstrates, few lives have more to teach us about the virtues of honour & probity.’ – Sir David Puttnam, producer of “Chariots of Fire” in his foreword. 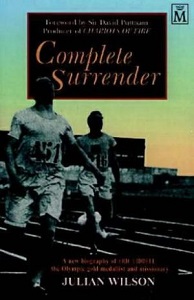