Harry Brash Bonsall – His daughter tells how, pursuing a vision from the shores of Canada to pre-war Britain, Harry (aka Henry) pioneered Christian training centres throughout England, in preparation for the day of Revival.

Harry *Harry Bonsall was a young man with an extraordinary vision, who knew where he was heading. God had given him a goal. *The training was arduous. Huge obstacles lay on the running track, & other athletes unexpectedly dropped out of the race. *What lessons did he learn along the way? How did he survive? Would he ever make it? “On your marks!” ‘I knew him to be a man of prayer. He had so much in his own mind & brains & heart & spirit. He was a creator, not a consumer ….influencing hundreds, if not thousands of students & tens of thousands of conference visitors, with untold numbers in meetings & rallies – & all over the world through his books. ‘We miss him…. but I am grateful for this biography that will stir up many more to go back to his writings, consider his sayings, follow his teachings & make a new commitment…. for themselves.’ Brother Andrew. ‘Don’t miss the opportunity to read about this amazing servant of the living God. I have met thousands of Christian leaders around the globe & Brash was among the most unique. 35 years ago, my wife & I came to the UK when Operation Mobilsation was just being born. Brash was one of the first Christian leaders to back OM 100% & from his college came men & women into many different aspects of OM. ‘Pass this book on to others or get extra copies to give away. I’m reading Billy Graham’s autobiography right now, & believe that….this book is just as important. GO FOR IT!’ George Verwer International Director, Operation Mobilisation. Pursuing a vision from the shores of Canada to pre-war Britain, Henry Brash Bonsall pioneered Christian training centres throughout England, in preparation for the day of Revival. Ruth McGavin is Henry Brash Bonsall’s daughter. 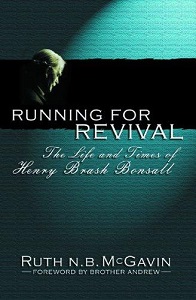