Nahum And Obadiah: An Expositional Commentary

Both prophecies are a revelation of Gods character and moral government of the world. .A revelation that contains a message of hope, comfort and encouragement for every Christian.

Approximately one hundred years after Jonah preached to the citizens of Nineveh to turn ‘from their evil ways’ and escape imminent judgement, God commissioned Nahum to prophesy the city’s complete destruction. At the time of his ‘burden’, the Assyrian Empire was both strong and wealthy, yet Nahum prophesied that soon the entire kingdom would be crushed for ever under the power of God’s wrath.

Obadiah’s prophecy unveils God’s sovereignty over all nations and events, and gives an example of his direct intervention in the political and military affairs of human history. The Sovereign Lord does as he pleases with the powers of heaven and the peoples of the earth. No one can hold back his hand or say to him: ‘What have you done?’

Both prophecies are a revelation of God’s character and his moral government of the world – a revelation that contains a message of hope, comfort and encouragement for every Christian: ‘The Lord reigns for ever’! It matters not how many nations oppose his rule or oppress his people; it makes no difference how many spiritual forces of evil ally themselves for his dethronement, for the Lord’s purposes will prevail. All that he has promised will be fulfilled. He is in control.

“Tim Shenton takes us to the most neglected of the Old Testament prophecies, Nahum and Obadiah, and gives us a clear verse-by-verse explanation. Better yet, he consistently shows these little prophecies to have ongoing significance. Wickedness still abounds. The righteous still find themselves befuddled and distressed by it. And the God of Nahum and Obadiah is still committed to punishing evildoers and vindicating his name and his people. This is a book that provides both understanding of difficult books and comfort for difficult times – and that certainly makes it well worth reading!”

Tim Shenton is the head teacher of St Martin’s School and an elder at Lansdowne Baptist Church, Bournemouth. He has written a number of other books, including a devotional guide entitled Opening up 1 Thessalonians, a study on the character of God (Our perfect God – a summary of the attributes of God), a study on revival, and an expositional commentary of the prophet Habakkuk. He and his wife, Pauline, have two daughters. 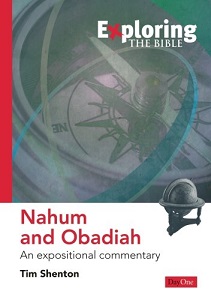 You're viewing: Nahum And Obadiah: An Expositional Commentary £6.00
Select options