The mention of Israel usually provokes a reaction of some sort in today’s world; often a negative one. ‘Israel Restored’ is an argument for the place of Israel in the heart of God, which is detailed and persuasive.

The mention of ‘Israel’ usually provokes a reaction of some sort. In today’s world, the reaction is often negative. Many regarding the nation is an obstacle to peace in the Middle East. I believe that such reactions are promoted by biased reports coming out of an anti-Semitic news station in the Middle East. Such propaganda is being uncritically supported and broadcast by national media throughout the Western world.

Among the Christian community, there is sometimes a similar polarising in people’s opinions of Jews and Israel as a nation. On the one hand there are a few who are deeply envious of the Jew and his traditions. At the other extreme are those who espouse ‘Replacement Theology’ and regard Israel as a distraction compared with the church and God’s purposes for it.

David Hamshire has a passion which drives him to discover an eternal viewpoint regarding Israel. David examines Scripture with the eye of a detective, and having found gold nuggets of truth, he then seeks to substantiate them by looking at the history of Israel and the Jews. David also notes how history has endorsed the validity of prophetic words found in Scripture, and the teachings of Jesus and the writings of the Apostles.

The result is a thesis which presents watertight arguments, giving evidence of Israel’s place in God’s purposes. Its non-existence from the AD 70’s. Its subsequent resurrection in the twentieth century. Its survival in recent wars in which it has been vastly outnumbered by invading forces. All these things speak of a nation which still has God’s hand upon it. 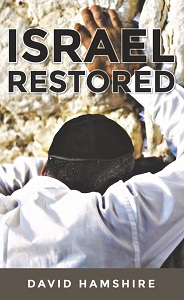