After leaving the British Army, Billy led raids for the UDA to raise money for weapons. He spent 7 years in Maze Prison for manslaughter and started to study the Bible – one night God spoke to him. ‘…my prayers became two-way communications with God.’

When Billy McFetridge was discharged from the British Army, the Ulster Defence Association knew they needed his skills as a soldier. Soon Billy was leading raids on clubs and shops, raising money for weapons.

Arrested on manslaughter charges, he spent seven years in the Maze Prison. Under the direction of a prison chaplain Billy started to study the Bible. One night God spoke to him. ‘For the first time ever, my prayers became two-way communications with God.’ Slowly the rebuilding of Billy McFetridge was underway.

‘As you read this book, you will face a life which had sunk to the depths of sin and crime, which tried to justify the vile deeds under the cloak of a paramilitary organisation. But God, through his grace, saw the tremendous possibilities in the life of Billy McFetridge. I have sat under his ministry at Bible classes in Strangeways Prison, and witnessed his love for these men, who are in prisons inside their own personalities.’ Canon Noel Proctor, MBE, MA. previously Chaplain at Wandsworth, Eastchurch, Dartmoor and Strangeways prisons

‘I have known Billy McFetridge for over twenty years and witnessed how, harnessing his own life experiences, he has worked tirelessly bringing real hope into the lives of people who for many reasons – including being on the wrong side of the law – thought this was impossible!’ Revd Bob Spratt, MBE, founder of Missions to Prisons and Friends of Prison Fellowship Ethiopia 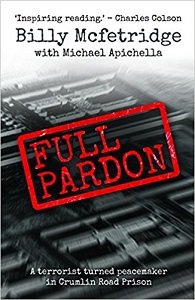