Cost of Discipleship, The

‘The Cost of Discipleship’ focuses on the most treasured part of Christ’s teaching, the Sermon on the Mount. This Christian classic written against the background of Nazi Germany still continues to speak powerfully in our current time.

‘The Cost of Discipleship’ focuses on the most treasured part of Christ’s teaching, the Sermon on the Mount with its call to discipleship, and on the grace of God and the sacrifice which that demands. Viewed against the background of Nazi Germany, Bonhoeffer’s book is striking enough. At the same time, it shares with many great Christian classics a quality of timelessness, so that it it has spoken, and continues to speak powerfully, to the varied concerns of the contemporary world.

‘Bonhoeffer’s critique of ‘cheap grace’ and his insistence on ‘costly grace’ continue to influence many today who are engaged in the struggle for a more authentic Christian witness in the world… Certainly in South Africa, Bonhoeffer’s influence in this regard has been considerable, both in the struggle against apartheid and now in the task of building a new and just democratic society’ 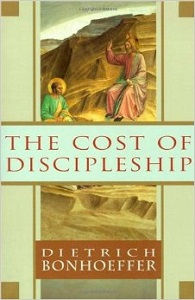 You're viewing: Cost of Discipleship, The £19.99
Select options